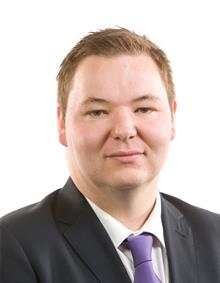 A lifelong Trafford resident, Andrew Western grew up in Timperley attending local schools before going on to study History and Politics at Sheffield University.

A staunch Labour supporter he joined the Labour Party aged 17 and held various positions at branch and consistency level for more than a decade.

Before becoming Leader of the Council Andrew worked in project management within the engineering sector specialising in transport and infrastructure.

Andrew was elected to represent Priory ward in 2011 and successfully defended his seat in both the 2015 and 2019 local elections. He became Deputy Leader of the Labour Group in May 2014, before becoming Labour Group Leader six months later.

Just four years later, under his leadership, Labour became the largest political party in Trafford bringing 14 years of Tory rule to an end.

In addition to his role as leader of Trafford Council Andrew is the Executive Member for Sustainability and Climate Change and sits on the Greater Manchester Combined Authority (GMCA). He has portfolio responsibility across Greater Manchester as Lead member for Green City Region.

He is an active member of the Local Government Association (LGA) and sits on its Improvement and Innovation Board – and holds a non-executive director post at Trafford Housing Trust (THT).

Andrew has been a governor at Wellfield Infant School in Sale since 2007 and is a board member of Youth Mental Health Matters a local charity campaigning on mental health support for young people.

Andrew has been selected twice as the Labour Parliamentary Candidate for Altrincham and Sale West in 2017 and 2019 – reducing the Tory majority on both occasions.